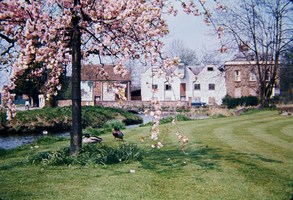 The old mill buildings in 1969

At one time there were 37 water mills on or near the River Wye along the 11 miles from its source at West Wycombe to the the Thames at Bourne End. Pann Mill is one of the few remaining, and the only one in operation.

Milling has long been associated with the River Wye - the first record of Pann Mill is in the Domesday census of 1086, one of six mills on the river at the time. The first Pann Mill was probably associated with the Hospital of St John the Baptist, the ruins of which are still visible in Easton Street opposite the mill. The records of 100 years later show that the mill was then owned by the Pinel family, and it is probably from this family that Pann Mill derived it's name.

Ownership of the mill changed many times over the years, and an archaeological dig discovered that major rebuilding took place on at least 3 occasions. The oldest remains found dated from the 14th century.

The most recent mill was built in 1759, with a new waterwheel and milling machinery fitted in around 1860. Commercial milling ended in 1967, and in 1971 the mill buildings and the associated miller's house were demolished as a part of a road widening scheme. The road widening did not take place as originally planned, so the High Wycombe Society undertook some restoration of the mill and its machinery.

The present, much smaller, mill building was designed by a Society member, Colin Kennedy, originally to preserve the machinery remaining from the demolition.  A significant donation of funds from Marks & Spencer, to celebrate their centenary in 1984, together with concerted fundraising by the Society, enabled the building to be erected.   Of course, once the building existed it needed to be filled!

The previous mill had the traditional three floors, whereas the present building has only two.  The top floor was a grain store.  Sacks of grain were hauled up by a sack hoist and stored until needed.  Subsequent movement of grain was as much as possible by gravity.  In the present mill grain is still stored on the top floor, but in bins close to the mill stones. 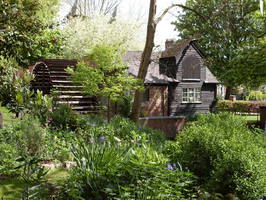 During 2018-2019 we stripped all the old buckets from the waterwheel and replaced them with new ones. These had to be cut and bent from sheet steel which was done by an engeneering company in the Midlands. We then drilled and cut the necessary holes and then had them galvanised. They were then de-greased, primed and painted and bolted back on to the wheel frame which was also given a coat of paint. The waterwheel is now all nice and shiny and because everything is balanced it turns much more smoothly.

We hope to produce a video of the work as soon as we can.